The protein synthesis inhibitor can stop or slow the growth or proliferation of cells by disrupting the processes that lead directly to the generation of new proteins, The ribosome is a biological machine that utilizes protein dynamics on nanoscales to translate RNA into proteins.

Protein synthesis inhibitors act at the ribosome level, taking advantage of the major differences between prokaryotic and eukaryotic ribosome structures, they work at different stages of prokaryotic mRNA translation into proteins like initiation, elongation, and termination, By targeting different stages of the mRNA translation, antimicrobial drugs can be changed if resistance develops.

Spectrum: Aminoglycosides have concentration-dependent killing and a post-antibiotic effect, They have a narrow antibacterial spectrum that includes:

Aminoglycosides toxicities availability of other less toxic antimicrobials would not make the drugs of choice for many infections. 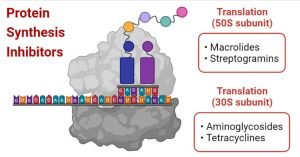 Due to their hydrophilicity, tissue concentrations are low. Concentrations in CSF are inadequate, even in the presence of inflamed meninges, Aminoglycosides levels in pulmonary secretion are 10 to 45% of simultaneously measured plasma concentration, Since the toxic effect limit the dosing capability of aminoglycosides, the level achievable in respiratory tissue may be inadequate to eradicate Enterobacteriaceae, Moreover, aminoglycosides perform poorly in an acidic environment associated with pneumonia, particularly in areas of the abscess.

More than 90% of the parenteral aminoglycosides are excreted unchanged in the urine by glomerular filtration. Accumulation occurs in patients with renal dysfunction and dose adjustments are required depending on creatinine clearance.

2. Nephrotoxicity: It is reversible and more common in elderly patients and in the presence of other nephrotoxic drugs, e g., cephalosporins, and vancomycin.

They include minocycline, doxycycline, tetracycline, and tigecycline.

They are broad-spectrum bacteriostatic antibiotics. They are effective against:

Excretion: Doxycycline and tigecycline are eliminated primarily by non-renal mechanisms, they do not require dose reduction in renal impairment.

3. Hepatotoxicity: It is more likely to occur with pre-existing hepatic disease and pregnant patients. It may progress to hepatic necrosis.

4. Photosensitivity to sunlight or ultraviolet rays: Photosensitivity reactions ranged from itching and burning sensation to mild erythema of sun-exposed face and extremities. It is rare with no permanent sequels. It is advisable to instruct the patient to avoid direct sunlight exposure.

5. Vestibular reaction: dizziness, vertigo, nausea, and vomiting are reported with minocycline and doxycycline.

Spectrum: Tigecycline has an expanded spectrum of activity and decreased susceptibility to the development of resistance compared to other tetracyclines. It has activity against many resistant Gram-negative (but not Pseudomonas and Gram-positive (including MRSA) bacteria and anaerobes.

Therapeutic Uses: Tigecycline is approved for the treatment of complicated skin and skin structure infections and complicated intra-abdominal infections caused by susceptible organisms.

Clindamycin is widely distributed in body fluids and tissues with excellent bone and soft tissue penetration, but it does not reach CSF in significant concentrations. It penetrates well into abscesses and is actively taken by phagocytic cells, Only 10% is excreted in urine within 24 hours, thus it does not require dose reduction in renal impairment.

Pseudomembranous colitis: This condition may occur due to the overgrowth of Clostridium difficile, which can be treated by metronidazole or vancomycin.

Spectrum: Despite its wide range of antimicrobial activity, it has limited use because of its serious adverse reactions and the increased incidence of bacterial resistance, It covers:

Chloramphenicol is rapidly and completely absorbed from the gastrointestinal tract and is not affected by food ingestion or metal ions. Parenteral administration is generally reserved for situations, in which oral therapy is contraindicated as in the treatment of meningitis septicemia.

It penetrates the brain and crosses the placental barrier, Chloramphenicol is inactivated in the liver by glucuronosyltransferase and is rapidly excreted (80-90% of dose) in the urine.

Spectrum: It has activity against all Gram-positive cocci including MRSA, Vancomycin Resistant Staph aureus (VRSA) and Vancomycin-Resistant Enterococci (VRE).

It has excellent oral bioavailability and when given orally, it achieves plasma concentrations comparable to the intravenous route. It does not need dose adjustment for renal failure.