Systolic BP is the maximum pressure exerted in the arteries when blood is ejected into them during systole (range 100-140 mm Hg). Diastolic BP is the minimum pressure within the arteries when blood is draining off into the remainder of the vessels during diastole (range 60-90 mm Hg). The arterial BP is conventionally written as systolic pressure over diastolic pressure eg. 120/80 mm Hg.

As systole is shorter than diastole, the mean pressure is slightly less than the value halfway between systolic and diastolic pressure, An approximation to MAP can be obtained by applying the following equation:

Blood pressure in the brachial artery in a young adult in the sitting or lying position at rest is approximately 120/80 mm Hg. Blood pressure is a variable that is influenced by many different factors, these include: 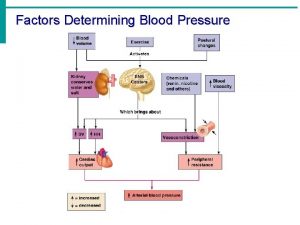 Arterial BP acts as the driving force for blood flow through the tissues of the body. For blood to flow through a vascular bed there must be a pressure gradient between the arterial and venous ends of this bed. The size of that gradient (ΔP) equals the rate of blood flow (F) times the resistance to flow (R) i.e. ΔP = F x R (note that this is a rearrangement of the basic flow equation).

Applying this to the systemic circulation, ΔP is the pressure gradient between the aorta and the right atrium. Since atrial pressure is close to zero, ΔP is equal to the arterial BP. The total blood flow through the systemic circulation is the cardiac output. This is an important relationship because it indicates that BP may be regulated through changes in either cardiac output or peripheral resistance.

The arterial BP is directly proportionate to the cardiac output, which is equal to stroke volume x heart rate.

It is the total resistance to blood flow through the systemic circulation. The peripheral resistance is essential for the maintenance of arterial BP particularly the diastolic. It is produced mainly in the arterioles and is determined by the radius of the vessel, blood viscosity, and length of the vessel. Normally, adjusting the arteriolar diameter can modify it, because the other 2 factors are normally kept constant.

Regulation of the arterial blood pressure

These are potent rapidly-acting pressure control mechanisms. They start acting within few seconds after the alteration of the BP, and their action lasts for several hours then declines. They are mostly nervous reflexes. They include the following:

(These reflexes are discussed before in the cardiovascular regulatory mechanisms)

These mechanisms control the arterial BP by adjusting the vascular capacity and resistance as well as the blood volume. They start acting within few minutes after the alteration of the BP and their action lasts for several days then declines. During this time, the nervous (rapid) mechanisms usually fatigue and become less and less effective. Such intermediate-term control mechanisms include the following:

These mechanisms control the arterial BP by the renal-body fluid mechanism (i.e. by adjusting the body fluids and blood volumes through modifying the excretion of water and salt by the kidneys. This occurs by variation of Glomerular filtration rate, and Secretion of the aldosterone hor.

Tachycardia shortens the period of the diastole; this reduces coronary flow. However, this is overridden by coronary dilation associated with the increased metabolic activity of the heart.

Blood flow through the coronary system is regulated almost entirely by the vascular response to the local needs of the cardiac muscle for nutrition. Increased cardiac work leads to hypoxia (the most important factor), elevated H+, CO2, K+, lactate, prostaglandins, and adenosine concentrations.

When the mean arterial blood pressure falls, the overall effect of the reflex increase in sympathetic discharge is increased coronary blood flow secondary to the metabolic changes in the myocardium at a time when the cutaneous, renal, and splanchnic vessels are constricted, In this way, the circulation of the heart, like that of the brain, is preserved when flow to other organs is compromised, Therefore, coronary blood flow is predominantly under non-neural control.