When carbohydrates, fats, and proteins are burned with pure oxygen, large amounts of energy are released. They are stored in the form of high-energy compounds such as adenosine triphosphate (ATP) and creatine phosphate (CP= also called phosphocreatine). ATP is the energy currency of the body and the most important high-energy compound.

In the body, there is an energy balance between the caloric intake (in the food and drinks we consume) and the energy output (the energy we burn during different body activities) So, 3 possible states can occur: 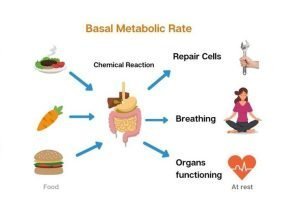 How can we calculate the energy input?

By using the physiologic caloric value of food, which is the amount of energy liberated by oxidation of one gram of food substance in the body. It equals: 4.1Kcal/gram of carbohydrates, 4.1Kcal/gram of protein, and 9.3 Kcal/gram of fat.

Definition of the metabolic rate: It is the amount of energy liberated per unit of time. It is divided into several components including performing essential metabolic functions to keep the person alive (BMR), physical activities, processing of ingested food, and maintenance of body temperature.

Value of BMR: for a normal adult male about 40 Kcal/h/m2 ± 15%. It differs according to age, sex (mainly due to differences in the number of skeletal muscles and adipose tissue), and body surface area (determined from height and weight tables).

Measurement of the metabolic rate by indirect calorimetry

It was found that the amount of oxygen consumption per unit of time is proportionate to the energy liberated by metabolism. Thus, the metabolic rate can be calculated from the rate of oxygen consumption. The energy equivalent of oxygen is the amount of energy liberated per liter of oxygen utilized in the body. It is greater for carbohydrates than for fats or proteins. For the average mixed diet, it is about 4.82 Kcal/liter of O2 consumed.

Oxygen consumption is measured with a special spirometer called “the metabolator.” Determination of the precise energy equivalent of oxygen requires data on the food being oxidized, which can be obtained from analysis of “the respiratory quotient”.

Importance of the respiratory quotient

Factors that decrease the respiratory