Serine is used in the biosynthesis of proteins, It is an α-amino acid, Serine is classified as a nutritionally nonessential (dispensable) amino acid, but metabolically, serine plays an essential role in many cellular processes, It is the main source of one-carbon units for methylation reactions that occur via the generation of S-adenosylmethionine.

It is a non-essential hydroxy-containing and glucogenic amino acid.

I- Synthesis of Tyrosine

There are 2 pathways for the catabolism of phenylalanine:

1. Melanin: in the melanocytes (pigment cells) in the skin, hair, and eye.

Both reactions occur in the thyroglobulin, Then T3 and T4 are released.

3) Tyrosine forms catecholamines (dopamine (1), norepinephrine (2), and epinephrine (3)). This occurs in cells of neural origin and in the adrenal medulla.

One of the principal metabolites of epinephrine and norepinephrine is vanillyl mandelic acid (VMA) which increases in the urine of patients with pheochromocytoma (tumour of the adrenal medulla).

The signs and symptoms include:

The disease could be diagnosed by increased plasma phenylalanine levels (>20 mg/dl) (normal: 0.7 – 4 mg/dl); and by using a ferric chloride test which gives a blue-green colour with urine, Treatment is through a diet of low in phenylalanine and rich in tyrosine.

Inherited metabolic disorders are characterized by high levels of plasma tyrosine, Death usually occurs early from liver failure, Treatment is by low tyrosine and phenylalanine diet, The most important types are:

Inherited metabolic disorder due to defect in homogentisate oxidase, This causes the accumulation of homogentisate in blood and urine, Homogentisate is oxidized into a brownish-black pigment that causes the darkening of urine on standing in air, There is also arthritis and generalized pigmentation of connective tissue (Ochronosis))

Hypomelanosis (decreased pigmentation) is due to defects in the eye, hair, and skin melanocyte. The most severe is due to a deficiency of tyrosinase enzyme in the skin, hair, and eyes. So, melanin pigments will not be formed leading to the white colour of the skin and making it sensitive to light which may lead to burning and carcinoma. Lack of pigments in hair causes fair hair, and lack of pigments in the eyes causes photophobia. The patient is called Albino.

It is an essential, glucogenic, ketogenic, and heterocyclic amino acid.

Niacin is one of the B vitamins and enters in the formation of NAD and NADP 60 mg. Tryptophan can form 1mg of niacin. Its deficiency causes pellagra. 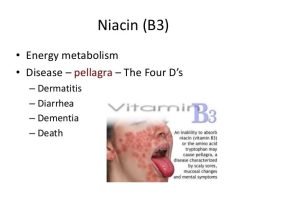 Pellagra is a disease caused by severe niacin deficiency. It is characterized by:-

1% of Trp is normally converted to serotonin. This is done by hydroxylation of tryptophan by tryptophan hydroxylase in the liver. This is a mixed-function oxygenase that forms 5 hydroxytryptophans then it is decarboxylated to serotonin (5 hydroxy tryptamine) by pyridoxal phosphate enzyme. Serotonin is found in the intestine, platelets, and central nervous system.

In argentaffinoma (malignant carcinoid syndrome) which is serotonin producing. tumor cells in the argentaffin tissue of the abdominal cavity, there is overproduction of serotonin, where up to 60% of tryptophan is converted into serotonin, and excretion of 5-hydroxy indole acetic acid/(5 HIAA) which is the main catabolite of serotonin is increased in urine.

It is a hormone, derived from Trp, serotonin is an intermediate. Melatonin is formed in the pineal body tissue and in peripheral nerves of man and secreted into the blood and CSF. Circulating melatonin is taken up by all tissues including the brain to be metabolized and excreted in the urine.

Melatonin is synthesized in human during the dark period of the day and maintained at a low level during the daylight. This diurnal variation is brought about by norepinephrine that stimulates pineal cells to synthesize melatonin. Norepinephrine increases CAMP which increases N. acetyl transferase activity.

Nucleotidases and phosphatases hydrolyze the mononucleotides to nucleosides, which either are absorbed or are further degraded by intestinal nucleosidase to purine bases (adenine [A] and guanine [G]), and pyrimidine bases (cytosine [C], thymine [T] and uracil [U]) and pentoses (ribose or 2 dexoyribose).

The dietary purines and pyrimidines are not used to a large extent for the synthesis of tissue nucleic acids but are largely catabolized in intestinal mucosal cells. Also, the pentoses (ribose or 2-deoxyribose) are not utilized by the body due to the absence of specific pentose kinase in the human body.

Nucleotides (or purine and pyrimidine bases found in them) can be synthesized de novo, Also, they can be obtained through salvage pathways that allow the reuse of the preformed bases resulting from normal cell turnover.