Neurorobotics is the branch of science combining neuroscience, robotics, and artificial intelligence, It refers to all robots developed for interacting with or for emulating the nervous system of humans or other animals, The neurorobotics can be developed for clinical purposes, such as neurorehabilitation or neurosurgery, or for studying the nervous system by emulating its properties.

It is the science of embodied autonomous neural systems, Neural systems contain brain-inspired algorithms (such as connectionist networks), computational models of biological neural networks (such as artificial spiking neural networks, large-scale simulations of neural microcircuits) and actual biological systems, It is based on the idea that the brain is embodied and the body is embedded in the environment, so, most neurorobots are required to function in the real world, as opposed to a simulated environment.

It can find novel ways of controlling robots using neuro-inspired technologies, It can present embodiment for functional abstractions of (anatomical areas of) the brain, sometimes called brain models. It aims to uncover entirely new ground, neurorobotics is an excellent area to explore how ethical and social concerns are related to scientific research and how science can engage with this type of concern.

Neurorobotics differs from other strands of robotics in that it attempts to bridge many areas of neuroscience and robotics to implement the neurobiological structures predicting animal and human behaviour in robots, This avenue of investigation has many scientific and technical aims. 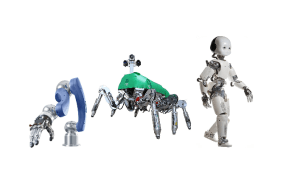 Neurorobots have control systems based on principles of the nervous system, They operate on the premise that the brain is embodied and the body is embedded in the environment, so, neurorobots are grounded and situated in a real environment, simulating an environment that can introduce unwanted and unintentional biases to the model.

The robot should be capable of performing a variety of tasks, This is based on its onboard sensors, the signals of which are processed by artificial intelligence to change the behaviour of the robot, the fundamental point differentiating robots from electromechanical devices is the adaptability of their operation. In neurorehabilitation, this differentiation has been considered as picky, Robots and electromechanical devices are often grouped together during analyses of their efficacy.

Robotic therapy leads to a reduction of costs for the healthcare system, Quantified the cost of using a Neurobot (a robot for the treatment of post-stroke upper limb impairment) to be 37 % of the hourly physiotherapy cost, with benefits that include a reduction in hospitalization time, This suggests that robotic technology can be a valuable, and an economically sustainable aid, in the management of patient rehabilitation.

The robot must have haptic properties and some intelligent capabilities related to an adaptive assist-as-needed approach,  Neurorobots have the potential for accurate assessment of motor function to assess the patient’s status, to measure therapy progress, or to give the patient and therapist real-time feedback on movement performance. The neurorobot can engage in the behavioral task, It is situated in a real-world environment, It has the means to sense environmental cues and act upon its environment.

Neurorobots are divided into many classes based on the robot’s purpose, Each class is designed to implement a specific mechanism of interest for study, neurorobots are used to study motor control, memory, action selection, and perception.

Neurorobots are used to study motor feedback and control systems, they are used in developing controllers for robots, Locomotion control can be mimicked using models or central pattern generators, clumps of neurons capable of driving repetitive behavior, to make four-legged walking robots, The controller learns to create the correct control signal by predicting the error, robots can produce adaptive arm movements or to avoid obstacles in a course.

Neurorobots are used to study sensory perception, particularly vision. These are primarily systems that result from embedding neural models of sensory pathways in automates, This approach provides exposure to the sensory signals that occur during behavior and allows a more realistic assessment of the degree of robustness of the neural model, It is well known that changes in the sensory signals produced by motor activity offer useful perceptual cues that are used by organisms.

Biological robots are not officially neurorobots, they are not neurologically inspired AI systems, but actual neuron tissue wired to the robot, This employs the use of cultured neural networks to study brain development or neural interactions, Which consist of the neural culture raised on a multielectrode array (MEA), which can record the neural activity and stimulating the tissue, the MEA is connected to the computer which presents a simulated environment to the brain tissue and translates brain activity into actions in the simulation, as well as providing sensory feedback.

Neuroscientists benefit from neurorobotics as it offers a blank slate to test various possible methods of brain function in a controlled and testable environment, While robots are more simplified versions of the systems they emulate, they are more specific, allowing more direct testing of the issue at hand, They have the benefit of being accessible at all times, while it is very difficult to monitor large portions of the brain while the animal is active, especially individual neurons.

The development of neuroscience has produced neural treatments, These include pharmaceuticals and neural rehabilitation, Progress is dependent on an intricate understanding of the brain and how exactly it functions, Neurorobots can improve the range of tests and experiments that can be performed in the study of neural processes.

Many neurorehabilitation techniques have been developed to restore neuromotor function, aiming at the recovery of physiological movement patterns in patients with neurological pathologies, However, none has emerged as a gold standard, since it is a common opinion that methods should be specifically tailored for pathologies and patients, However, a common feature of these neurorehabilitative approaches is the need for intensive, repetitive, and task-oriented treatments.

Neurorobots must be safe not only in terms of movement but also from other medical points of view, despite the variety of gait patterns, robotic gait training performed with bodyweight support has only been proven safe for training intensive walking in non-autonomous ambulatory patients with subacute stroke, so, the cardio-respiratory demand is lower than that in conventional walk training performed overground.

Overground walking was less demanding than robotic walking, the robot imposes non-natural trajectories, which force subjects to activate non-natural sensorimotor walking patterns. We can enlarge the meaning of “harm” to all possible damage to patients, Time spent on an ineffective, slightly effective, or detrimental robot should be considered as damage because the patient could spend the same time on more effective treatment.

Robot usage should be at least as safe and effective as other treatments, meaning that it should have a higher benefit-risk ratio than that of human-administered treatments, This ratio should be evaluated before the commercialization of the device, and not afterward, as is often done currently.

The purpose of introducing robots into rehabilitation hospitals is not to replace therapists, but rather to complement existing treatment options, it is reasonable to believe that the reduction of healthcare costs is at least one of the main motives driving research in neurorobotics, Robots can reduce the cost of rehabilitation by reducing the number of required therapists.

There are many aspects limiting neurorobotics due to technological, behavioural, and economic barriers, Initial economic burden is a potential limit for robot adoption in neurorehabilitation, although it has been reported that the long-term use of neurorobots can decrease healthcare system costs, a single physiotherapist could manage up to four robots (hence four patients) at the same time.

However surgical robots were introduced at around the same time as neurorehabilitation robots, their benefit in assisting surgery (and especially minimally invasive surgery) is established, Even in fields with no unequivocal evidence of the superiority of robot-assisted over traditional surgery, the popularity and diffusion of robotic surgery have increased.

The patient’s feelings related to robot use in neurorehabilitation should be considered, identified the level of anxiety of patients is a negative prognostic factor for robotic therapy but not for conventional therapy, In contrast, patients who saw themselves as the chief causal factor in managing their recovery showed a higher probability of a better outcome with robotic rehabilitation, robots are not considered trustworthy because they lack human feelings, expertise, and common sense.