Hunger is a craving for food and is associated with objective sensations such as hunger contractions of the stomach. Appetite is a desire for specific types of food instead of food in general satiety means a feeling of fulfillment in the quest for food (the opposite of hunger). 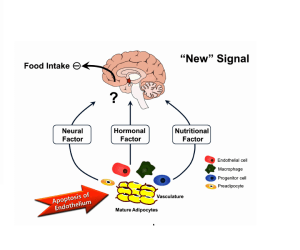 b) Effect of environmental temperature (thermostatic theory): Exposure to cold causes a tendency to over eating because it increases the metabolic rate and provides increased fat for insulation while exposure to heat results in under eating.

c) Feedback signals from adipose tissue eating. The hypothalamus senses energy storage through the action of a hormone called leptin, released from adipocytes. When the amount of adipose tissue increases ( = excess energy storage), adipocytes produce an increased amount of leptin that circulates in the blood. It crosses the blood brain barrier, binds with leptin receptors at multiple sites in the hypothalamus and initiates the following actions to decrease the food intake and increase energy consumption:

It prevents over eating, because nutritional feedback mechanisms take at least an hour before enough quantities of food substances are absorbed into the blood and cause inhibition of eating.

b) Psychological factors: Cultural, environmental factors and past experiences relative to the sight, smell and taste of food affect food intake.

Starvation is the absence of food intake, except for water. It may be partial or complete.

1- Depletion of food stores in the body tissues: An average 70 Kg man has about 0.1 Kg glycogen in his liver, about 0.4 Kg of glycogen in his muscles, and 12 Kg of fat. During starvation, the subject passes through the following phases:

3- Gradual weight loss: The individual loses about 1 Kg/day for the first 10 days, then, 0.3 Kg /day afterwards. Body organs also decrease in size; the liver, the kidneys, the heart, and the gastrointestinal tract, except for the brain, which is spared.

4- The decreased activity of both endocrine and exocrine glands

8- Hunger pains occur but disappear after 2-3 days. Atrophy of the intestine and decreased digestive secretions lead to diarrhea.

11- Edema mainly due to due to hypoproteinemia

12- Death usually occurs about 60 days from the start of starvation. The terminal event is intractable diarrhea.